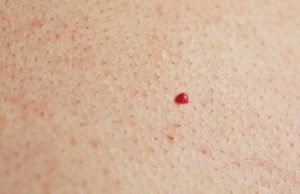 Angiomas are benign changes which in its base have a widened capillary network. They appear at all ages, but typically their number increases with age.

Angiomas occur as small, dotted changes on the surface of the skin or as bigger changes from several millimeters to a centimeter in size. Angiomas are red to blue-ish color and are more or less above the skin level.

Why is angioma removal recommended?

Depending on where the angioma appears, they can be exposed to a frequent injury. As a consequence, bleeding occurs which can be unpleasant for the patient.

How are angiomas removed?

Elimination of this type of change is quick, painless, efficient, and best performed with the method of radiowaves.

What is the difference between angioma and hemangioma?

Angiomas differ from hemangiomas by the time of appearance (hemangiomas occur after birth) and size.

Hemangiomas can be one- or two-sided. They often occur on the face and head but can occur on other parts of the body as well. They can be from several centimeters to several decimeters in size. They can look like “spilled wine”.

How are hemangiomas removed?

If exposed to injury and if bleeding can occur, hemangiomas are removed surgically in early childhood. It often happens that hemangiomas spontaneously disappear around the fifth or seventh year of life.

How dangerous are angioma and why do they appear on our skin? Angioma are benign changes which in its base have a widened capillary network. Find out more!